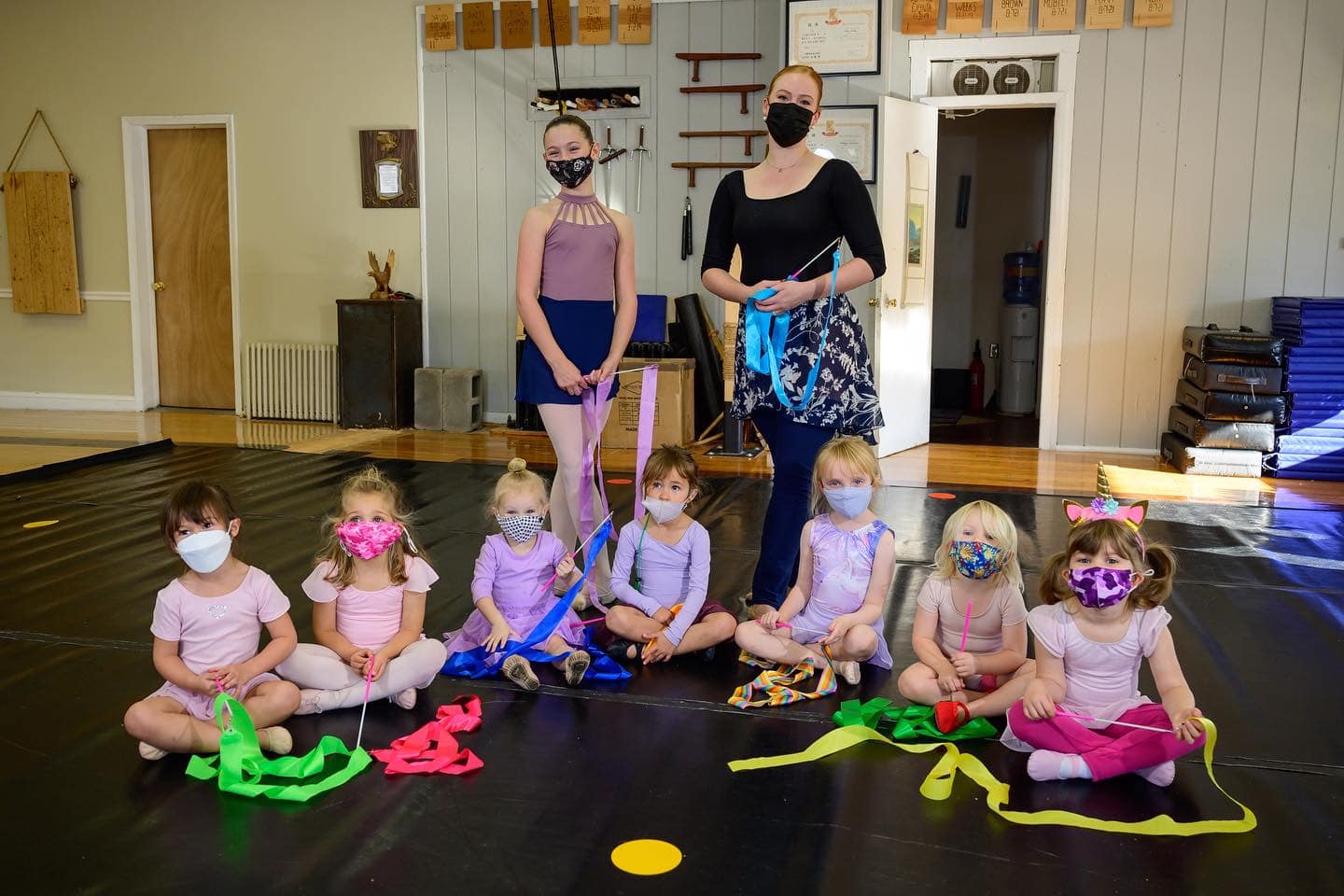 From ‘The Basement’ to Her Own Ballet School

For Kimberly Reim, a.k.a. The Redhead Ballerina, opening a dance studio was just one major event in a life-changing 2021

A year ago at this time, Kimberly Reim was a single lady with a different last name (Thompson), and she was perfectly content teaching ballet to a handful of students in a Berwyn Heights, MD, basement.

Today, the newlywed owns a thriving dance studio that’s already outgrowing its new home. She and her husband, Brendan, are making plans to grow their family.

“It’s been quite a crazy year, to say the least!” says Kimberly, who spent her early adulthood traveling up and down the East Coast as a professional dancer, model and teacher. She has built a strong online presence and social media following as The Redhead Ballerina.

At 28, Kimberly’s life is both settling down – and taking off.

“I really feel like I have found my place in life,” she says. “I found the perfect community.”

Teaching has been Kimberly’s biggest passion over the past eight years, but her commitment to the craft has intensified since launching her studio last summer.

The Berwyn Ballet School — named as an “ode” to its humble basement beginnings — currently has 55 students ranging in age from toddlers to teens and with varying levels of experience. At the moment, Kimberly is holding classes at a well-known martial arts academy in College Park, MD. She wants to keep her school relatively small, but with word of mouth spreading quickly around the area, she knows she needs more space.

“This was the perfect fit to start off, because I wasn’t purchasing a building or anything like that, but now, I need to grow,” she says. “I mean, I have no more room already, and it hasn’t even been a full year – which is good. It's the best type of problem to have.” 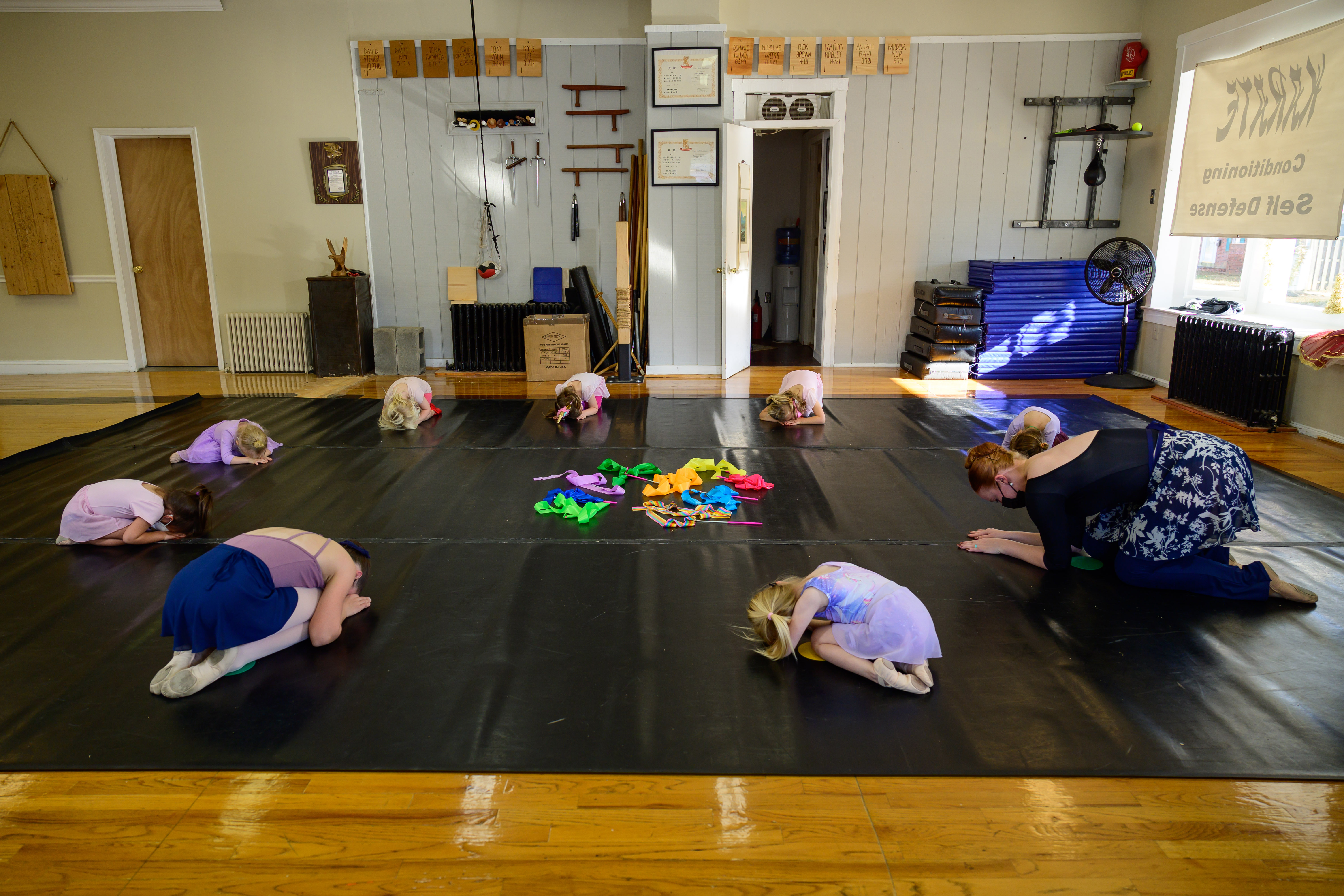 Kimberly didn’t expect to have this “problem” until later in life, but there’s no doubt that she was destined to have her own dance studio. Growing up in Poolesville, MD, her parents both owned small businesses and raised her with an entrepreneurial spirit. That, combined with a colorful imagination and intense love of dance, moved Kimberly to set lofty goals at an early age.

“My mom found something I made on Microsoft Word when I was like 13,” Kimberly recalls with amusement. “It was something about ‘Poolesville Regional Ballet,’ and classes were like $1.25 or $1.50 for an hour. It had a disclaimer: ‘Not proficient in pointe, so I don’t teach pointe.’ It was a whole advertisement! So, my parents always thought I would open my own school.

“I have always, apparently, wanted to be a teacher, and for the longest time, I would consider taking over [an existing dance studio], but I didn’t know if I would start one because of all the work that goes into it, building your student base. I’ve seen other teachers start their programs, and the hardest part is getting students.”

Kimberly had about 12 students in early 2021, and she enjoyed teaching “casual” ballet classes in the basement of one student’s home. One day, the homeowner approached Kimberly and asked if she’d ever considered starting a ballet school. The woman’s husband was a real estate agent, and he offered Kimberly the phone number of some local connections so she could start hunting for a space.

The rest is history. Kimberly went from casual classes to serious business in just a few months.

She attributes the early success of TBBS, in part, to its location – the martial arts academy is across the street from an elementary school – and to a growing need for affordable dance classes for families in the suburbs of Washington DC.

“I would say about 90% of my school is very large, Catholic families – I’m talking like 5 or 6 to 8 kids,” Kimberly says. “I think some of these families want to be able to give their kids the gift of dance and ballet, and keep it affordable but also decent training in classical ballet. So I think that’s also part of my goal with my school is trying my best to give back to the community and trying to make it as accessible as I possibly can.

“People have a calling to the priesthood, or they have a calling to be a vet or doctor, and I do feel like my calling is to be a teacher. Obviously, any teacher does not do it for the money. You do it because you love your students and you love what you do and you just want to pass it on to the next generation.” 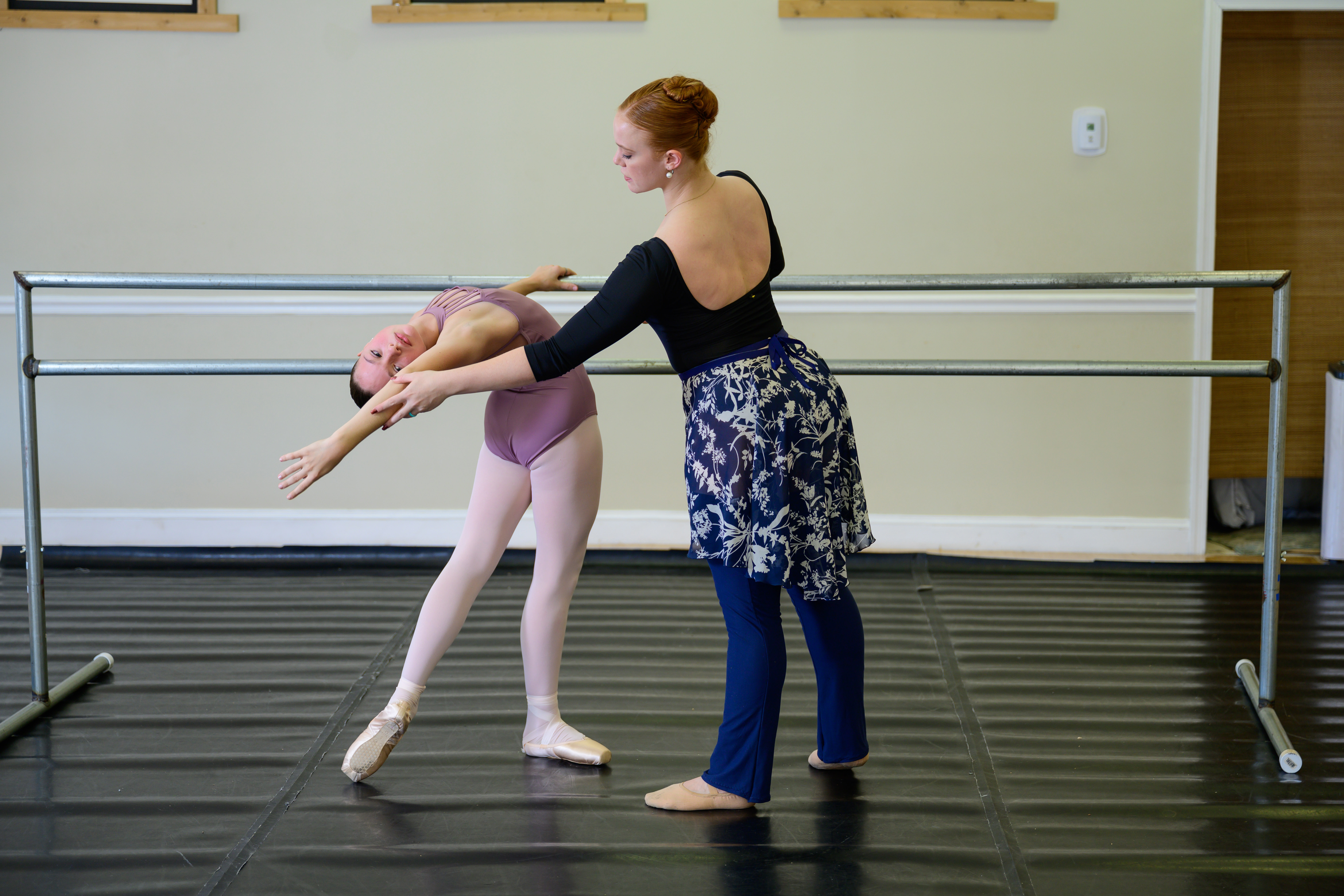 Kimberly trained with large, prominent ballet schools as a high-schooler – most notably, Maryland Youth Ballet and The Orlando Ballet School – but she treasured her earlier experiences in a more-intimate studio setting. That’s the type of environment she wants to provide for her students. She wants to “spread the beauty of ballet” while giving each ballet dancer the personal attention they need to thrive, in and out of the studio.

Her mission statement: “TBBS is committed to providing classical ballet training with an emphasis on ballet etiquette and passion for movement to create well-rounded dancers.”

“I’m not trying to create professional ballet dancers; I’m creating happy kids who love to move and dance,” she says. “I don’t want to put pressure on my students, and as a teacher, I would never want to feel like I was pressuring a student to do too much. I just want them to enjoy ballet because ballet is a beautiful thing.” 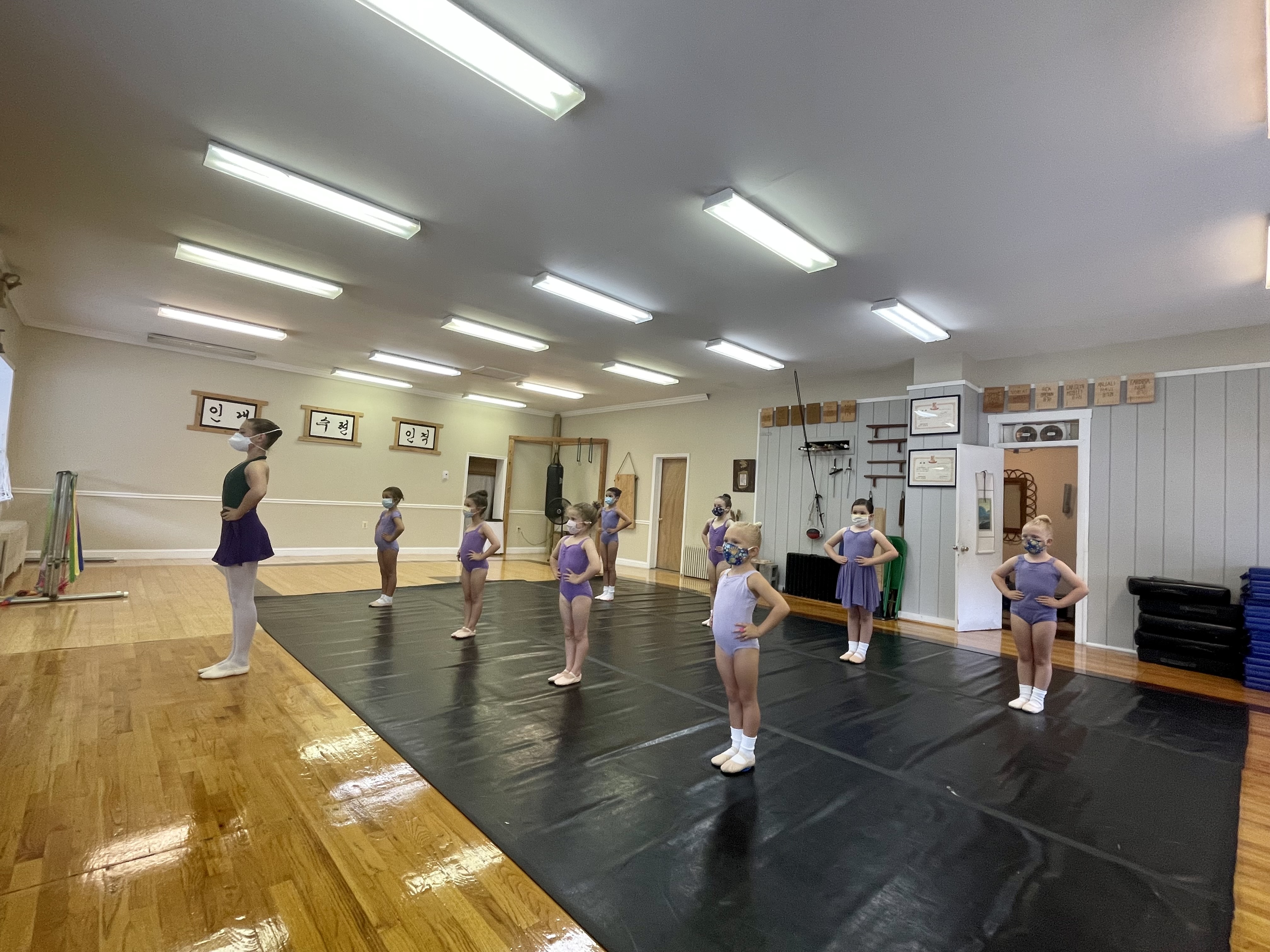 Back in January, Kimberly experienced her first big triumph as a studio owner when she accompanied one of her dancers to the Youth America Grand Prix in Pittsburgh. Watching 13-year-old Bradana perform the same classical ballet variation she had at age 14, when she performed on stage for the first time, and place in the Top 12 at the prestigious competition, was a “proud teacher moment” Kimberly will never forget.

“She doesn’t have the crazy long legs or archy feet, but this girl has the most incredible stage presence and energy I’ve ever seen,” Kimberly says. “She does competitions a lot for Highland dancing, and that’s why I felt comfortable bringing her, and she was fine. She has the best attitude.

“Going into competition, I tried to show her, you know, ‘Don’t worry about placing. That’s not why we go. We go for the learning experience and to learn variations and to perform because we love to dance, and that’s the best part.’

“We’re a small school, and we only brought one student, and she did one variation, and when they called her name for the Top 24, we were like ‘What?!?”and then they called it again for Top 12…and I would have been just as proud of her either way, because she did a fantastic job. Seeing your student succeed is such a lovely feeling, and the fact that she enjoyed her time on stage was very fulfilling for both of us.” 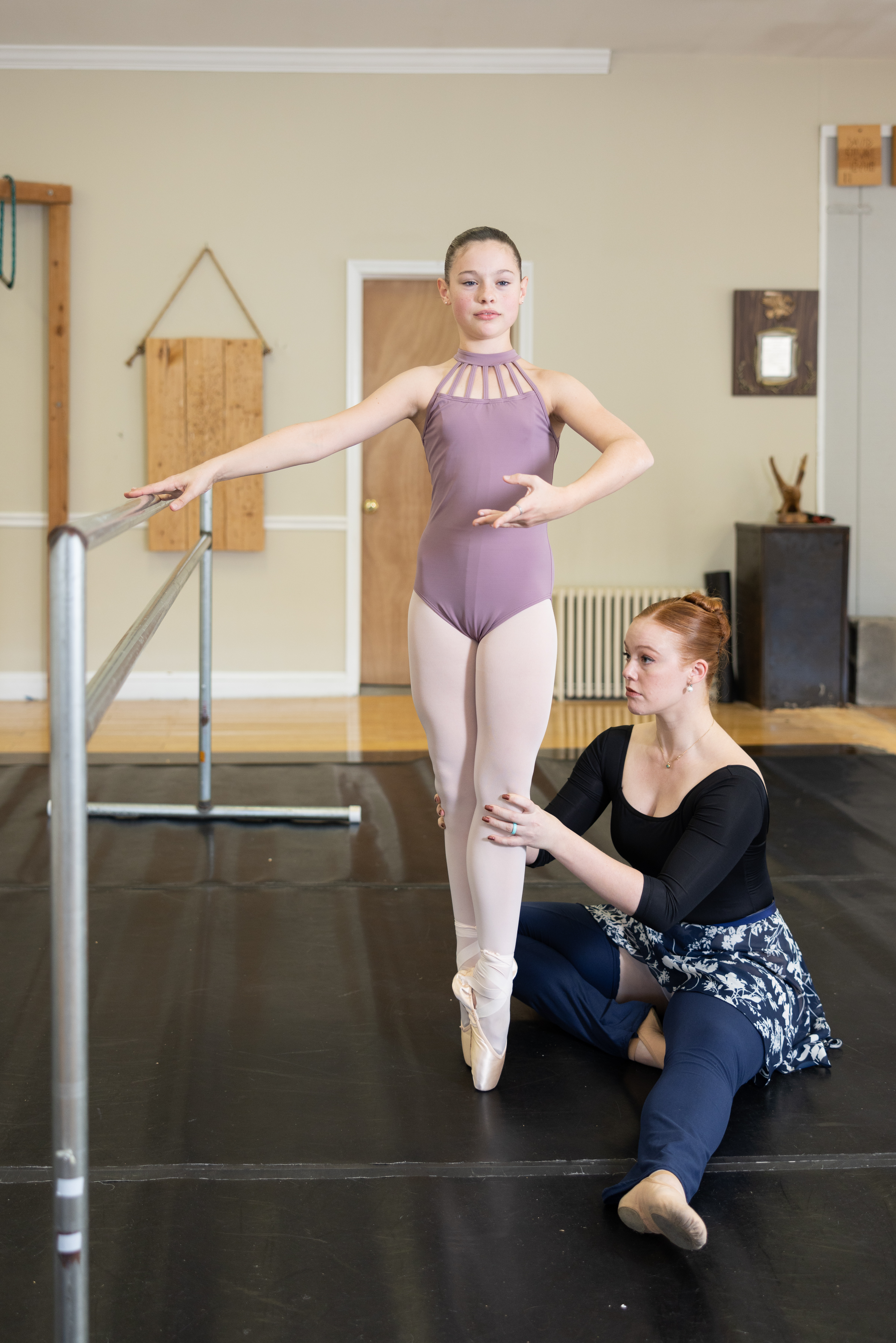 Although she relished the chance to watch Bradana excel on a grand stage, Kimberly is not concerned with racking up trophies or even “making a name” for TBBS in elite ballet circles. As per her mission statement, her main focus is on helping her dancers express themselves as artists and grow as people.

She sees her school as a big family, and she doesn’t want to lose that feeling of closeness, even as TBBS expands.

“I love really getting to know the students and their parents,” she says. “I’m not just their teacher. I had three of the little girls at my wedding. They were my flower girls. I’ve grown so close to these families, and I think that as a teacher and a human, that’s kind of what I would miss at a larger school: That interaction. I love the fact that these students, and all of these kids know, ‘If you’ve got anything going on and you want to talk to me, please call.’ I want them to use me as a resource.“

As Kimberly plans ahead for the rest of 2022, her biggest challenge is to balance the growth of her studio family with the growth of her actual family. She and her husband, a seventh grade teacher who is currently writing his first novel, are eager to embark on their first parenting adventure. So, in preparation for possible maternity leave, Kimberly has hired additional staff she trusts to help run the school, follow her curriculum and carry out the mission she holds so dear.

It’s not easy for Kimberly to contemplate letting go and stepping away, but she knows it’s something all moms eventually have to do.

“A big thing is knowing that as the school grows, I can’t just rely on myself,” Kimberly says. “I’m definitely a person who is like, ‘I have to do this because it has to be done right,’ and I feel like a lot of dancers and artists are like that. But I’m learning to kind of let certain things go, because I've tried to do it all, and unfortunately, it just doesn’t work.

“You want to give your students the best opportunities. You want to give them your heart, mind and soul. I’m sure all new parents are like, ‘Oh my gosh! I have to protect my kids!’ And I almost feel like my ballet students are my babies. I have to do everything to protect them and prepare them, so in a way, I feel like having a ballet school is the perfect way to get ready for motherhood." 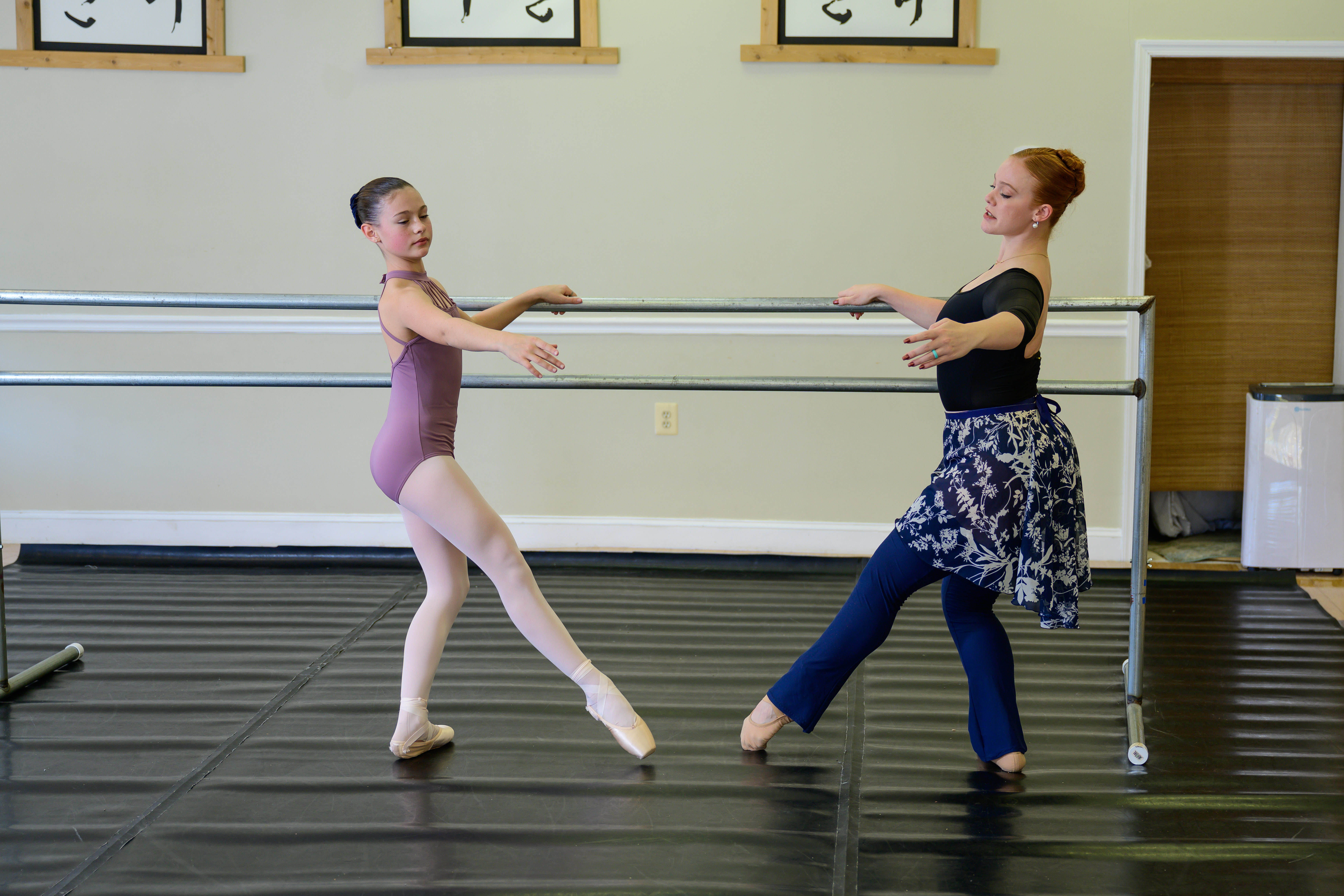 Art Stone Costumes would like to thank Kimberly Reim for sharing her story and photos from her studio. Images are by John Barrios (@johnbphoto_) and Dez Santana (@modelffidelity). You can find The Berwyn Ballet School on the web and on Facebook.